The Art of Crowd Control

Sept 4, 2011: one week before the tenth anniversary of the September 11 attacks in the United States and my friend, Lars, and I have landed at Newark International Airport for a less-than-a-week stint in New York City. There was no real purpose to coming to the ‘Big Apple’ other than seeing how accurate television shows and movies (and a particular video game) have portrayed this massive city – and to see a game of the U.S. Open while we were there [1].

Particularly against my advice of “do as the Romans do”, we had to do the touristy thing and visit Midtown and Times Square despite my reservations of intentionally going to large and crowded settings. As one friend kindly warned, “visiting Times Square just after midday feels like everyone in Manhattan decided to do so at the same time, and you all just so happen to come out of the same subway station, and you all are trying to go home on the same train or cab.” That was the most accurate description of being in an NYC crowd that I’d heard of.

After a day of walking around midtown, walking from Times Square in the direction of Port Authority, I had ‘jokingly’ told Lars that I was beginning to get the stereotypical aggravated persona of a New Yorker. ‘Jokingly’ ended up being a weird lie as stepping out of the way turned into passive bumps on the street, pausing behind individuals at a crosswalk became angrily moving in front of them because they were in my way, and cars that narrowly stopped before me on a street were given strong warnings of, ‘watch the <expletive> where you’re going you <expletive>’.

At some point, crowds of people with indifferent stares and sounds of cacophony while walking down a typical Manhattan street will get to you. It’s a ‘dog eat dog’ city with sketchy people abound and there are those that fight the crowds and those that get swallowed by them – and that’s pretty anxiety-inducing if you think about it [2]. Complexing this anxiety is the issues that New Yorkers have to deal with daily: there are way too many sketchy people around to be comfortable, it’s always loud (and the added tourists don’t help), people plan way more for their day than is humanly possible, and the city elicits juggling a balance between living comfortably in an expensive-city and maintaining a reasonable social life. Plus, did I mention the sketch-factor of some people. For most visitors and tourists, that’s a crazy crowd to deal with considering that people usually travel to get away from it all and not have to deal with the contentious and foreboding affairs of the locals – and especially in a city with almost 9 million people and a metropolitan population of 20 million.

Tokyo proper has 13 million people. Its metropolitan population is almost 38 million people. On face value, Tokyo should be so crowded and massive that any agoraphobe should have a heart attack hearing that. Several friends and coworkers, before they head out to Japan have asked, “how’s the crowd?”

Comparing Manhattan and Tokyo is a bit like comparing apples and pears. They’re both very similar and some of their characteristics are the same, but in the end, they’re two different things. On an objective scale, Tokyo has a large number of people spread out over an extremely large area while Manhattan has a large number of people trapped on an island. Tokyo focuses more on many mid-high density areas around the city versus Manhattan which has a handful of high-very high dense population zones. 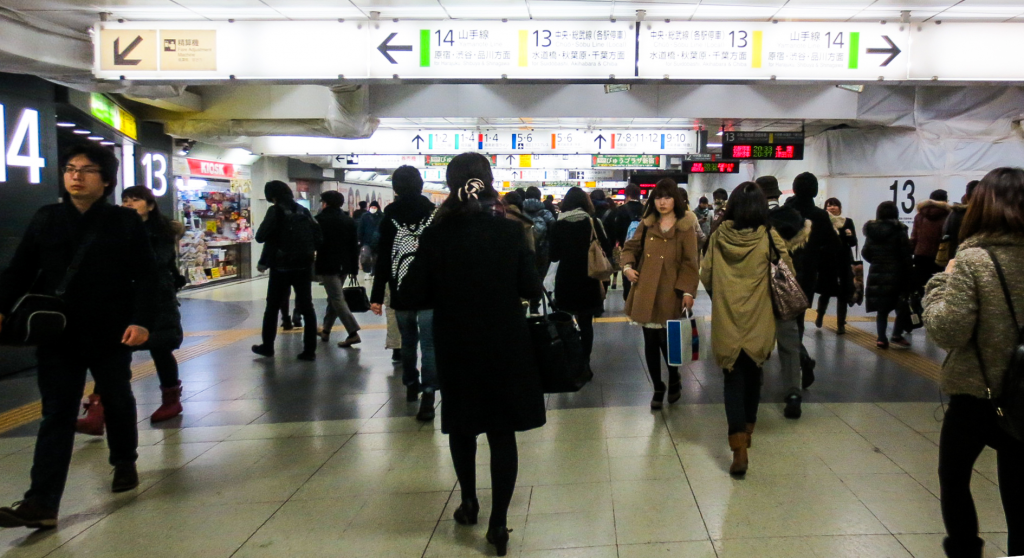 It depends on how you define a sketchy person. Are they unsafe? Do they give off a bad feeling? Do they not feel right? This is particularly problematic because many Westerners when they go to Japan – partially because of the language and culture barriers – have no real way to gauge this without resorting to cultural assumptions and stereotypes. Consider the lack of personal space, the avoidance of confrontation, or the following of rules to an extreme: when a Westerner who is exposed to this for the first time, they may not necessarily like or be comfortable with those things. The question isn’t ‘how are the crowds in Tokyo?’ but ‘how is the culture shock of being in a crowd in Tokyo?’

Japan is a country that travel blogs and magazine articles like to talk about and the cultural perspectives of crowd mentality are guaranteed to be a topic of discussion. It’s never about the objectiveness of what the crowd mentality is, though. Instead, it resorts to the writer’s perception of what they felt in that particular circumstance. There are a plethora of pictures of crowded Tokyo subway trains with more than shoulder-to-shoulder contact between passengers. Visitors with knowledge of even the basics of Japanese know when they’re being called ‘gaijin’ on the streets, even when they’re not doing anything particularly ‘foreign’ [3]. People perceive the frustration when trying to attempt conversation with a non-English speaker – and vice-versa.

I met a person at a hostel in Osaka who was voicing their frustration of being unable to understand how to get through the subway gates and said that the people behind her were giving her dirty looks and not helping her. When I went travelling with her the next day, sure enough, there was subway gate trouble again but it was clear that she was visibly frustrated at the situation, trying to insert the same voided subway ticket into the gate without avail. After the person behind her explained (in his own limited English) that her ticket was void, she ran off in a huff to the ticket machine. “See,” she said in a huff, “he didn’t even offer to help me at all.”

“I see,” I thought to myself as she then tried to navigate through the ticket machine, hitting perhaps every button but the green “English” button in the corner of the screen. Maybe being culturally perceptive requires being perceptive at all?

[1] In an unfortunate case of bad luck, it rained on the day we were supposed to go. This was after riding the Flushing line 40 minutes from Manhattan’s Times Square to Flushing Meadows. If we did watch that game, it could have been the game where Serena Williams had that verbal spar with the chair umpire’s decision on a questionable point for Samantha Stosur.

[2] Interestingly enough, this behaviour mimics the two sides of the spectrum for social anxiety: those that hide from society to not draw attention to themselves and those that are loud in society to avoid people thinking there’s anything wrong with them. As I align with the latter, the behaviour changes seem apt in retrospect.

[3] ‘Gaijin’ translates to ‘outside person’ and usually refers to a non-Japanese person or foreigner. Inherently, it’s not a derogatory word and if it were to be used in a derogatory fashion it would be based on the intent of the speaker (kind of like how sarcasm changes the meaning of words in a conversation). Nevertheless, some people find the term mildly offensive since it dichotomizes the people of Japan into two groups: those from Japan, and ‘everyone else’.